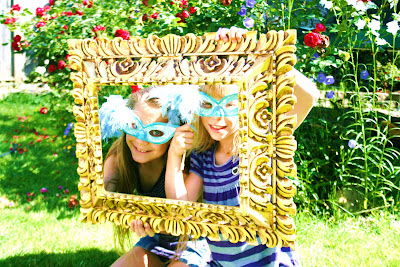 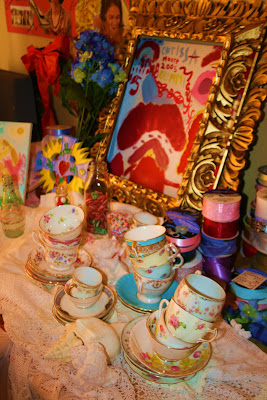 Everybody knows that Wonderland was once flat and black and shades of grey until Alice found the Hatter's mad tea party, and then all became colourful and round and filled with great joy - but I am getting ahead of myself, for here is the story..

Once upon a time, but not so long ago as that, Alice was going to a tea party; not just any tea party, but the Mad Hatter's Tea Party in the castle in Wonderland. 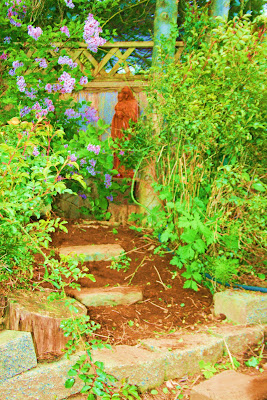 At first it wasn't hard to know which path to take, because Alice knew, as all good girls do, that it was the path with the magical tree, the one that Alice's mother had planted when she was just a girl. And there it was, the magical tree! Alice recognized
it because is was green and glowing 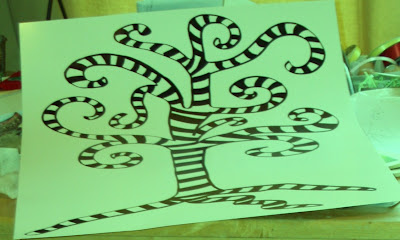 with black and white stripes, and stood bearing no fruit or leaves, next to the image of the mother herself. Yes, at first it was easy to choose the right path. But when Alice came to a fork in the road, she had to stop and consider, "who am I and which way do I go?" 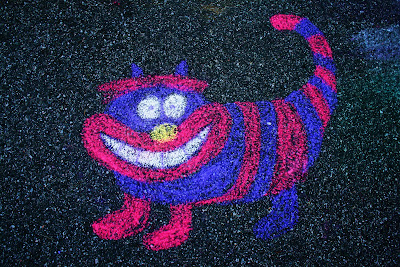 Immediately the Cheshire Cat appeared on the path.

"Given to mother when she turns out the light,
with a hug for father when he comes home at night,
Given to your cat with a scratch behind the ear,
Calms a toddler, dries a tear.

What is it?" crooned the Cheshire Cat, grinning from ear to ear.

Alice knew that once she had solved the riddle,
she would know which direction to take. 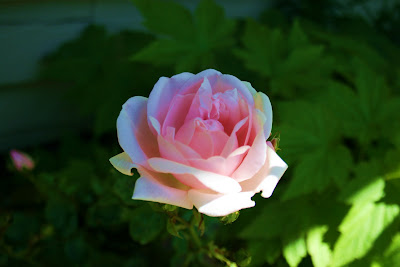 "Why that's easy" said Alice "a kiss is the answer." Immediately the Cheshire Cat disappeared and Alice knew she must turn right for down that path she could see baskets and buckets 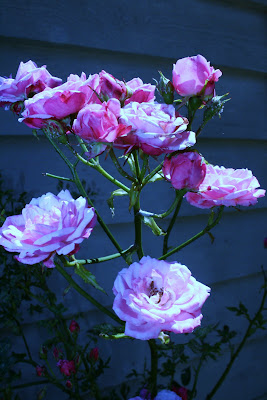 overflowing with pink kisses and they were growing in colourful abundance. So Alice continued skipping along, knowing that she had made a good choice because she felt very happy and joyous as we all do when we make a good decision.
As we do on our journeys, Alice soon came to another fork in the road, and immediately her way was blocked by the appearance of a rather large Caterpillar smoking bubblegum and lounging on a even larger mushroom.

"Found in dampness, shade and rot,
Red and white and polk-a-dot,
Eat one side and you'll grow tall,
Eat the other, not at all."

said the Caterpillar between bubbles.

Once again Alice knew that she must consider the riddle and then she would know which way to go. Alice hesitated, for she knew little about damp and shade and rot; but after a time, as life does, the caterpillar gave her a clue;

"Slice them on salad, fry them for tea,
stuff them, saute them, now think of me" 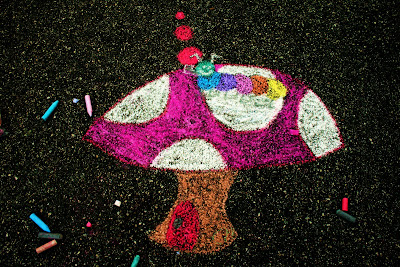 "Oh I see, it's obvious then isn't it" said Alice, listening to her heart, but the caterpillar was already crawling away through the grass. "The answer is a mushroom" Alice decided. Now Alice could choose the right path, which was actually the path to her right, with the very large mushrooms growing by its side.

"Right or wrong, right or left; in Wonderland these are the same question" thought Alice, and immediately it became clear that in Wonderland she must always choose the Right path to travel when she came to a fork in the road, for every time she make a choice she was in a different place altogether; and she really did want to make sure it is the right place, after all.

With this information Alice's journey became much easier. Whenever she came to a junction she simply chose what was right and soon she came to her destination all by herself for now she trusted her answer even before she heard the riddles. 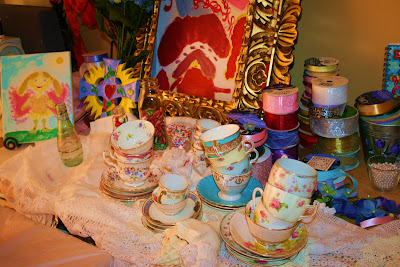 In time Alice came to a grand tea party, 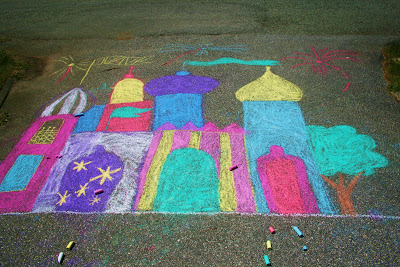 in a grand castle. Alice knew she was in the right place, for the 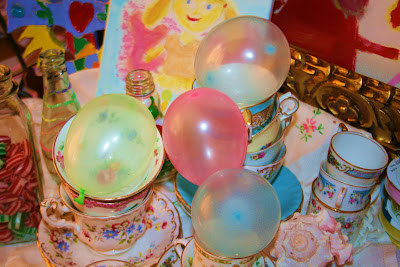 doorway was lit with little stars. Of course this was the Mad Hatter's tea party. 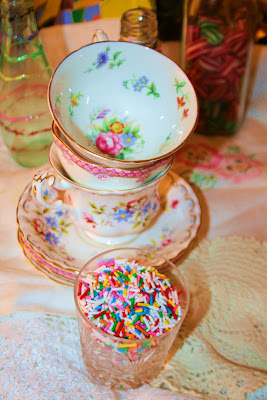 There were stacks of beauty and jars of sweetness, 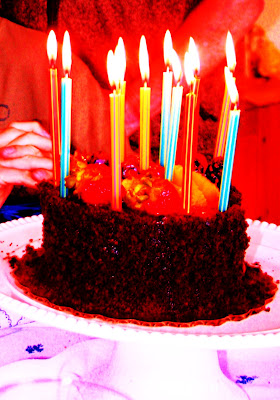 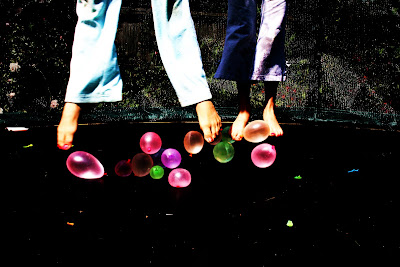 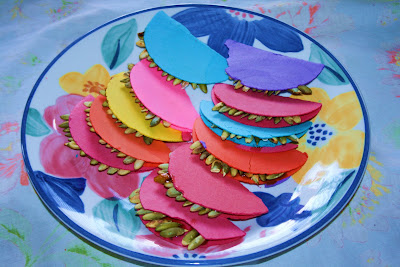 and all manner of exotic and lovely things. And without delay it began to rain teacups, for in Wonderland when someone finds their destination, that is what it does.
And shortly the Mad Hatter appeared.

"You have chosen well young Alice" flourished the hatter (and like the rest of us, it was clear that he too was really quite mad; but it did not matter, for a little craziness pointed in the right direction makes life quite wonderful). "Only those who choose that which is honourable and good and kind ever find my tea party, whether they be poor or rich, simple or cunning, sensible or even quite mad like myself!" 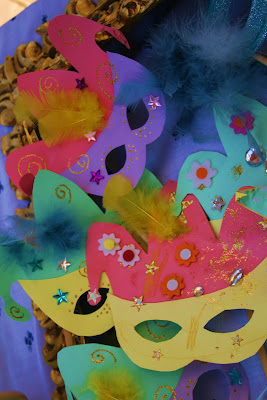 Mad as he was, the hatter was kind and friendly and good, and in the end Alice knew that that was what counted in Wonderland. 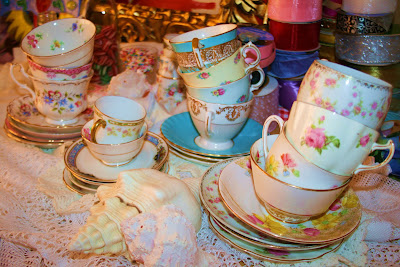 So Alice pulled up a seat, a golden throne next to her mother at the far end of the lace covered table and joined in the party
with great joy! 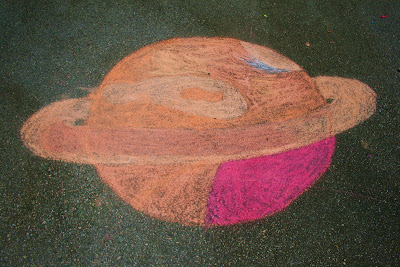 all art and ideas, tea party guests, in order of feet: 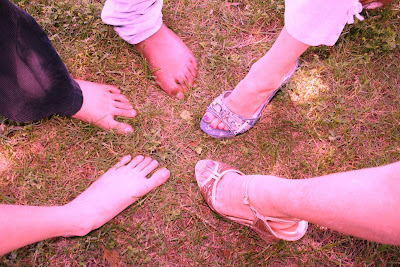 Please leave us a comment so we know you came by!


Many thanks to Vanessa at A Fanciful Twist for hosting this amazing Tea Party Art Gig! there are many more Tea Parties here so you can check them out all week! All year!

Lenora
I am a mother, artist and writer. I hope to spend my days adding beauty to the world, raising my heirs well and pampering my husband but it doesn't always work out that way! I rejoice in my family and friends, art, writing, reading, running, hiking, eating, and entertaining. Here, I am tracking the rhythm and routine of a year in our home and publishing various projects, art and fiction. Welcome to my world! 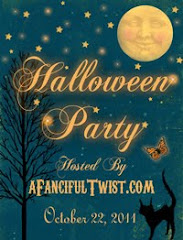 One Heart One World 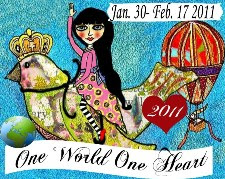 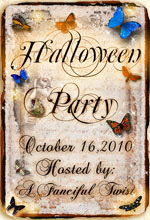 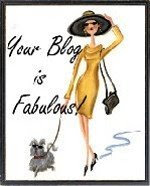 All art, photos and prose copyright, please contact for use.